How enterprises can save 2 IT jobs by automating governance processes

The manual maintenance and upkeep of Microsoft Teams is time-consuming and good IT professionals are hard to find on the market.

The number of unfilled IT positions at the beginning of 2022 is almost 100,000 and growing. In order not to jeopardise productivity and security - in short: the company's goals - IT management is expected to come up with suitable solutions.

In order not to jeopardise productivity and security - in short: the company's goals - IT management is expected to come up with suitable solutions.

Automating Microsoft Teams governance rules is an adequate way to reduce the workload for IT professionals so that they can avoid costs and staff shortages.

You also minimise the risk of losing frustrated employees whose personal development and professional challenge fall by the wayside.

Better deploy staff in a way that adds value to the business and motivates them at the same time.

For the IT department, the lifecycle of a Teams room comprises five phases from request to archiving and deletion.

Within the phases, IT staff sometimes face high costs with the Microsoft Teams platform, which far exceed the costs of the system:

Some of the most important cost factors in running a team room are the waiting times and reconciliations during the approval process.

Theoretically, approvals only take a few minutes. However, people often underestimate the total effort involved, as in the following scenario: who applies for which room and for what, etc.? The effort quickly amounts to up to 1 hour per room approval.

The IT department is the bottleneck and blocks collaboration processes in the company.

The approval process is divided into two areas: "end users" and "IT department".

Exact definitions are necessary so that IT does not have to interpret them. Additional coordination is necessary.

The requesting employee and the IT employee lose time as a result.

If the creation of Teams Rooms is locked to the end users, the IT department must include and configure Channels, Apps, Folder Structures, Site Columns, Site Content Types, Sensitivity and Retention Labels, and Room Users.

As the request is processed by the IT department, the Teams room is naturally created by the IT staff.

Possible tasks of an IT staff member during the manual creation of a Teams room:

Optimistic estimated effort: between 0.25 and 2 hours per room setup

An external user with whom collaboration has already been terminated must be identified and removed manually in the corresponding Teams room. If the user belongs to more than one team room, this must also be checked.  An effort of 0.25 to 1 hour is to be estimated for each external user.

Teams room structures are often defined and implemented during the conception phase. Subsequent changes and adjustments are almost inevitable.

A typical example scenario is the request of an end user from the specialist department to have the version of a document displayed in the file view in order to see whether it is the current version.

This scenario cannot be mapped comprehensively on the basis of Microsoft standard on-board tools. A script must be developed that iterates through all Teams rooms and adds the version column to each file view.

All subsequent changes to the governance concept must be scripted, tested and documented.

Each change can be compared to a small IT migration project, where all staff need to be informed and, if necessary, trained about the changes.

Regardless of whether user feedback or adapted company processes are responsible for the adjustments, the restructuring means between 1 and 3 hours per team room, depending on the complexity; in individual cases it can be even more.

The standard archiving mechanism of Microsoft Teams often does not comprehensively fulfil the professional requirements and must be completed by extensions and/or manual intervention.

In addition, the rooms must be deleted completely after a certain period of time.

During the archiving and deletion processes, the end users have to be informed about the actions.  This again means effort for internal communication.

The effort amounts to 0.5 to 3 hours per room archiving & lifecycle management.

Effort and costs can be significantly reduced by standardising and automating processes:

Individual task steps that you can save through templating and standardisation, using the example of creating a team room: 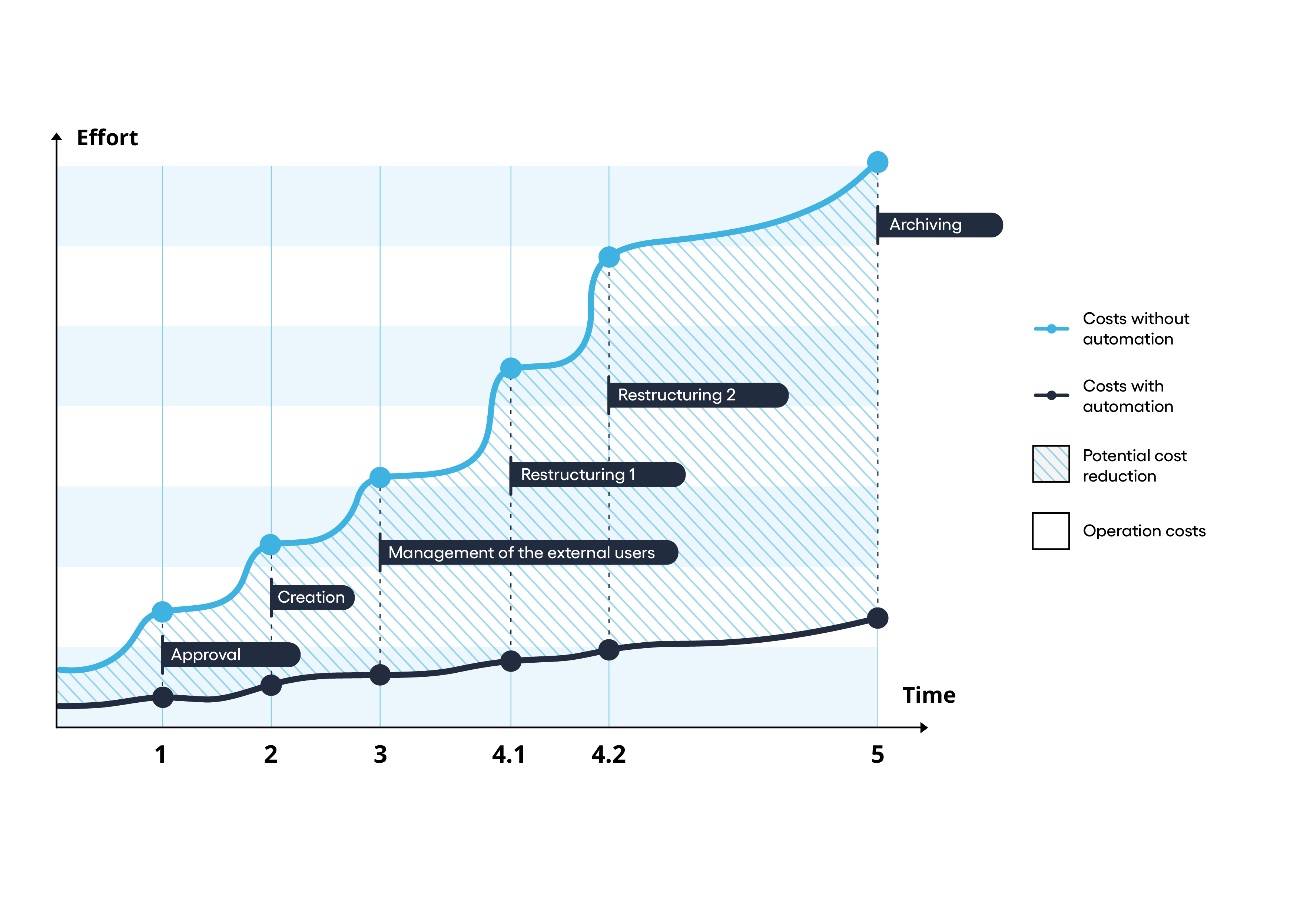 Cost comparison: Governance of the MS Teams collaboration platform with and without automation

Operating costs are significantly lower, especially in the operational business phases and at the end of the lifecycle, if you rely on automated governance.

The average saving per team room is more than four hours per year.

4,500 hours per year equals more than two FTEs, i.e. two full-time positions, for which you do not need any specialist staff in the IT department.

When governance solutions start to pay off

According to a study by the HdM, 71% of those surveyed currently still implement governance in the company manually by IT.

This study also comes to the conclusion that this only seems manageable up to a size of 200 team rooms.

Above 200, the internal effort increases so much that it is recommended to either use scripts developed in-house with Microsoft PowerShell or a third party solution. 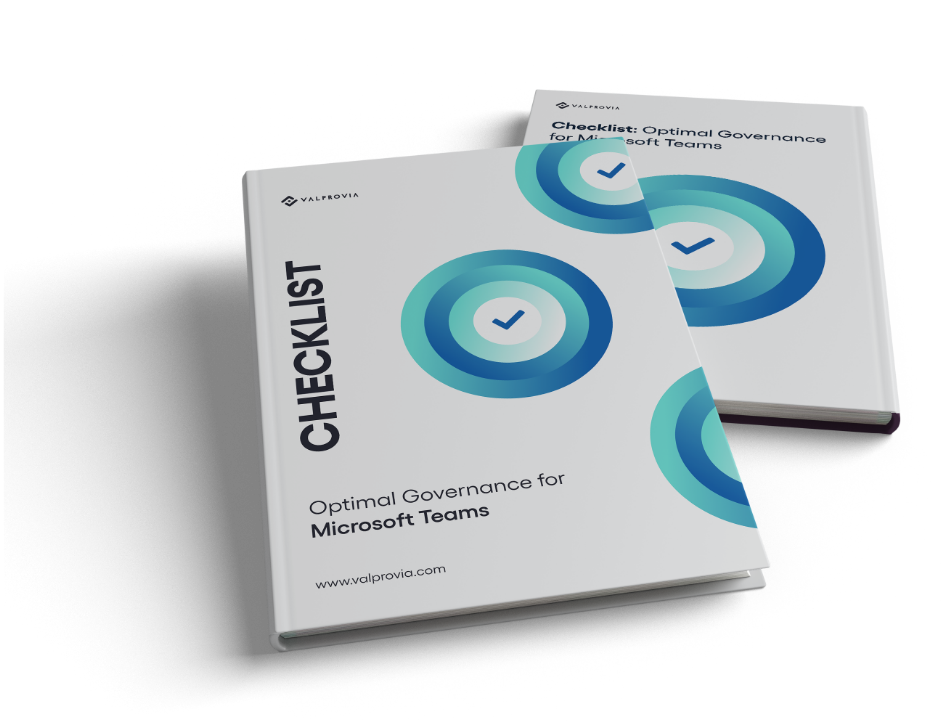 From the request for a Teams room through the entire lifecycle to its archiving, there are clearly measurable administrative costs in IT.

By automating processes and standardising the Microsoft Teams collaboration platform, medium-sized companies with around 1,000 employees can save up to two IT specialists.

Cagdas Davulcu is a Microsoft 365 enthusiast, solution architect and CEO at Valprovia GmbH. Mr. Davulcu brings many years of professional experience as a software developer, consultant and software architect to his role as CEO of Valprovia.

Risks from sprawl in Microsoft Teams - control the chaos with automation

What every IT leader needs to know about Microsoft Teams Governance